A Magistrate Court sitting in Agbogudu Enugu State has ordered for the remand of a Lawyer, FC Okeke, Esq., in Police Custody in lieu of his client.

His Worship Ezeobi Ngozi Anidi (Mrs) made this order on the 16th March 2021, in a criminal case between Commissioner of Police vs John Chidozie Igwe (CMC/12c/2017).

According to the ruling John Chidozie Igwe, was absent, therefore his lawyer, FC Okeke, Esq, must be remanded in police custody pending when his client is produced.

See a copy of the ruling below 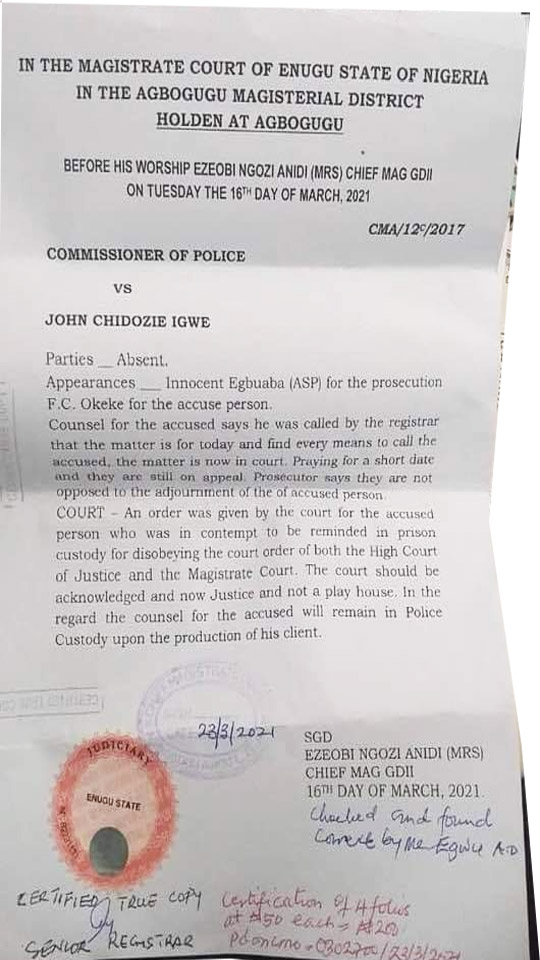 Why we can’t probe Senators indicted by NDDC – Panel

NJC recommends 22 judges to Buhari for appointment to Supreme Court, others

No Result
View All Result

We use cookies on our website to give you the most relevant experience by remembering your preferences and repeat visits. By clicking “Accept”, you consent to the use of ALL the cookies.
Cookie settingsACCEPT
Manage consent

This website uses cookies to improve your experience while you navigate through the website. Out of these, the cookies that are categorized as necessary are stored on your browser as they are essential for the working of basic functionalities of the website. We also use third-party cookies that help us analyze and understand how you use this website. These cookies will be stored in your browser only with your consent. You also have the option to opt-out of these cookies. But opting out of some of these cookies may affect your browsing experience.
Necessary Always Enabled

Any cookies that may not be particularly necessary for the website to function and is used specifically to collect user personal data via analytics, ads, other embedded contents are termed as non-necessary cookies. It is mandatory to procure user consent prior to running these cookies on your website.